Spartanburg Regional is a network of facilities, programs, and almost 9,000 staff who provide health services to residents of Upstate South Carolina and western North Carolina from birth until the end of life.

Historical Photos from the Spartanburg Library

The beginning: Invention and

On July 21, 1919, Spartanburg General Hospital (SGH) broke ground, and a newspaper article promised the people of Spartanburg that they could look forward to one of the “best arranged and equipped hospitals in the entire South.”

A little more than two years later, on Aug. 29, 1921, people arrived by motorcars, horse-drawn buggies, wagons and trolleys to celebrate the opening.

Spartanburg General’s early years were devoted to establishing key services. The Spartanburg General Hospital School of Nursing graduated its first class in 1922. Student nurses and SGH nursing graduates would play important roles in providing patient care for many years. The medical laboratory, the dietary department, a volunteer dental clinic and a social services department were also established in the first few years.

The 1929 stock market crash resulted in the closure of more than 700 hospitals across the country between 1928 and 1938. Spartanburg General remained open.

Patients paid their hospital expenses in creative ways. Farmers brought chickens, fruit and vegetables as payment on accounts, and their produce and livestock fed the patients. Flour and sugar sacks were turned into aprons and towels. Staff in the dietary department made soap.

In spite of the Great Depression, SGH continued to add services. In 1933, W.C. Guy, the hospital electrician, helped improvise an electrically-heated incubator for premature babies, and the hospital assigned two nurses and a room in which newborns could be isolated, creating the forerunner to today’s neonatal intensive care unit (NICU).

In 1934, Spartanburg General opened the first local cancer clinic. It is one of the oldest American College of Surgeons (ACOS) Commission on Cancer-approved cancer programs in the nation.

In the 1940s, a wing was added to the south end of the hospital with 63 private rooms, a new surgical suite and other modern facilities. The School of Nursing added a new library and laboratories. From 1943 to 1946, the Spartanburg General Hospital School of Nursing was affiliated with the United States Cadet Nurse Corps. Nurses could transfer to an Army, Navy or Veterans hospital during their last six months of training.

With World War II raging, more than 30 local physicians left Spartanburg to serve in the war.

After the war, expansion continued to accommodate the postwar baby boom. Additional expansions in the 1950s and 1960s added a pediatric floor, a new delivery suite, a larger emergency room, additional operating rooms, and intensive and coronary care units. Bed capacity was now 459.

The 1960 expansion offered patients new comforts including private or semi-private rooms with private bathrooms. Bedside telephones and a nurse call system were installed, and the bed crank of the 1920s gave way to an electrical bed operated at the touch of a button. Color televisions replaced the coin-operated radios once mounted on the bed.

That same year, the ‘Gray Ladies’ began their service of guiding patients to their rooms from the admitting office. This was the inception of the volunteer services department.

By the mid-1960s, the hospital had more than 1,000 staff members, and the patient population was about to change exponentially. In July 1966, the hospital was approved for Medicare patients. This brought a multitude of new rules and regulations and a pressing need for trained staff and new beds.

At the same time, hospital-based nurse training programs were being phased out all over the nation and replaced by college and university training. In February 1967, hospital officials signed an agreement with University of South Carolina (USC) trustees to establish USC-Spartanburg (now known as USC-Upstate), complete with a nursing school.

After 48 years of educating nurses, the Spartanburg General Hospital School of Nursing graduated its final class in 1969. The school brought more than 1,000 graduate nurses into the profession.

In 1968, Spartanburg General added a new data center to handle a modern phenomenon: a tsunami of information. Computers had come to the General, and they had come to stay.

A technological revolution was also at play in medicine. New treatments for cancer and coronary disease called for new laboratories and the latest equipment. A newborn nursery suite opened in 1968 contained a nursery for well babies and an intensive care nursery with equipment to monitor babies’ heart rate and respiration, as well as a transport isolette with battery power so that newborns could be safely transported between hospitals.

The Age of Technology

In 1976, SGH technicians began using ultrasound equipment to monitor pregnancies. An endoscopy department opened, and in 1977, the hospital obtained a $550,000 EMI scanner, the first full-body CT scanner in South Carolina.

Throughout the 1970s and 1980s, Spartanburg General expanded its commitment to educating medical professionals. The Department of Medical Education was established in 1970, making Spartanburg General the first hospital in South Carolina approved by the American Board of Family Practice for family practice residencies and the fifth chartered Family Medicine program in the nation.

In 1981, Spartanburg General’s Pharmacy Residency Program earned accreditation from the American Society of Hospital Pharmacists, which allowed post-graduates a year-long experience in different specialties to prepare them for supervisory positions in other hospital pharmacies.

Technological improvements and a growing staff of medical residents called for more space. In 1972, Gov. John C. West presided over the groundbreaking ceremony for the $3.5 million ambulatory care, education and administration building. The building offered a modern outpatient service unit and an emergency department equal to the task of serving 40,000 patients a year.

A new name – a new way of providing health care

The 1980s heralded a new direction for Spartanburg General Hospital as it moved from a community institution to a regional tertiary care hospital.

The hospital added home health and hospice programs to provide end-of-life care and support for patients and their families. In 1984, Spartanburg General’s In-Patient Hospice Unit – the first in the two Carolinas – opened its doors.

The hospital opened a new Sleep Disorders Center—one of the first programs of its kind in the Southeast.

Spartanburg General was also at the forefront of cancer research. In 1983, a $150,000 National Cancer Institute (NCI) grant enabled the hospital and its staff to participate in the National Community Clinical Oncology Program (CCOP), the first of many cancer research projects at the hospital.

During the hospital’s celebration of its 65th birthday in 1986, the decision was made to change the institution’s name from Spartanburg General Hospital to Spartanburg Regional Medical Center (SRMC).

The 95-bed Regional Heart Center opened in 1988. It was the first in the Carolinas to consolidate the prevention, diagnosis, treatment and rehabilitation of heart diseases under one roof.

The new Heart Center brought the total number of beds at SRMC to 588.

In 1994, SRMC purchased the building and equipment of Doctors Memorial Hospital on Serpentine Drive. Renamed the Spartanburg Hospital for Restorative Care, the hospital serves acutely ill patients who need care longer than is provided in a traditional hospital setting.

The eight-story Rose and Walter Montgomery Patient Tower opened in 1994. Designed to meet new demands for patient comfort and family involvement, the tower also brought services physically closer to one another to make the operation of the hospital more efficient.

In 1996, the Regional Outpatient Center opened. Built on the grounds of the former nurses’ residence, the building consolidated all outpatient services.

SRMC also consolidated its women’s services areas at the hospital by opening the Regional Center for Women in 1996.

The Rx Robot entered the scene in 1997, continuing the hospital’s role as an important innovator in health care. The robot minimized medication errors and ensured that expired medications were disposed of immediately.

SRHS continues to grow and to innovate.

The 21st century is offering scientific possibilities to medicine that could never have been imagined even a decade ago.

A new Emergency Center (EC) opened in 2004 with 55 beds, double the size of its predecessor. It included a dedicated fast track area and a separate four-pod Behavioral Health Unit. The EC became one of the busiest in the Carolinas, with almost 100,000 visits annually.

In 2008, Spartanburg Regional became the first hospital in the South to perform robotic endoscopic beating-heart surgery.

In 2015, the Gibbs Cancer Center & Research Institute began to use a surgery-free radiation therapy: the CyberKnife Robotic Radiosurgery System.

In 2016, Beaumont Mill filled with people for the first time in nearly 20 years. After a year of renovations, Spartanburg Regional Healthcare System relocated 600 administrative and support services associates to the former textile mill.

Spartanburg Regional Healthcare System continues to grow and change in order to provide state-of-the-art care to our patients and their families. 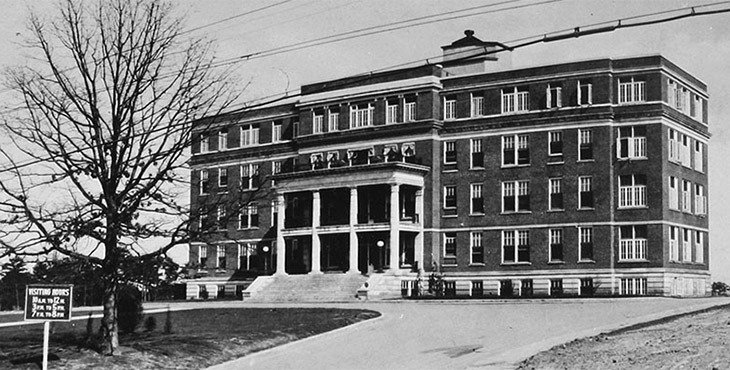