Elite training for athletes, young and old, at any skill level. Offering organized, educational and progressive training that's customized to your athletic abilities. 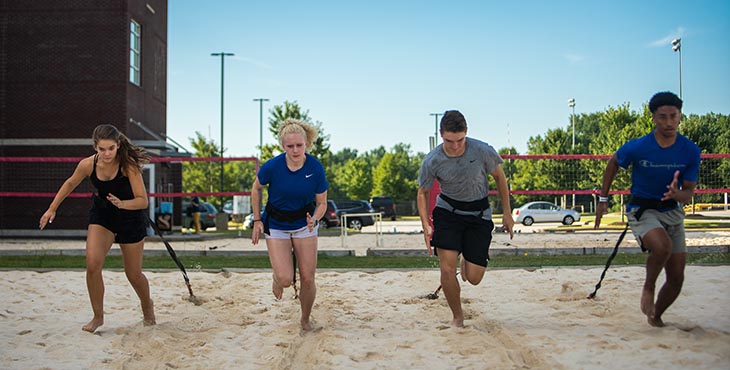 Athletes, young and old, at any skill level, can experience elite training with our Sports Performance program. Spartanburg Regional’s Sports Medicine Institute (SMI), offers safe and professional-level training at the Upward Star Center and other locations throughout the region.

At SMI Sports Performance, we know the kind of athlete who wants to dominate the game. Most athletes do not know where to start, which can be overwhelming. We have experienced coaches who know the formula to your athletic success.

Registration has begun for our summer training classes:

You will experience organized, educational and progressive training that's customized to your athletic abilities. Our program includes:

Through building confidence and athletic skills, our athletes, parents and coaches report increased levels of performance both on and off the field.

Our world-class facilities at the Upward Star Center don’t stop at professional equipment and climate control. Whatever your sport — basketball, football, soccer, volleyball, lacrosse, track – we’ve got you covered with the courts and fields you need to progress in your training. That includes:

Enjoy your first class free by signing up for a trial session.
Get in Touch

Enjoy your first class free by signing up for a trial session.
Get in Touch

What Our Athletes Are Saying

It began with a desire to become more physically fit for the marching band, but it turned into so much more. Logan started his work with Gary, Blake and the team nearly four years ago with the group and personal training to improve his fitness level.

Fast forward to today, and Logan is a rising sophomore headed off to Camden Military Academy with a newfound sense of confidence and accomplishment. This fall, Logan will tackle both marching band and football at the military boarding academy while also focusing on academics. Logan's father, Bill, has been more than satisfied with Logan's transformation and the skillset he is taking with him to school in the fall.

"One of the greatest assets of this program is the staff. The performance coaches are exceptionally well-trained professionally and personally. The coaches have the unique ability to meet each athlete at their current skill level,” Bill said. “Their individualized approach builds confidence both on and off the field. If you come here and watch, you can see they try and achieve small wins for each child, no matter their skill level. I would recommend the Sports Performance program to any athlete at any age and skill level. If you want to develop in a sport and professionally, this is the place to come."

Chauncy Haney has been working with Sports Performance since early 2020 with one goal in mind – to mentally and physically prepare for the NFL.

Chauncy spent the last four years at North Greenville University in South Carolina as a defensive end and outside linebacker. He drove nearly an hour each day to work one-on-one with Sports Performance Supervisor Gary Hazelwood. Each day for two to three hours, he would work on strength, agility, speed and technique. To up his game, he also participated in weekly yoga for flexibility and balance. Of all he accomplished with the sports performance team, he's most impressed with the attention to form and technique.

"You think you know how to run until you come here. Gary worked with me to improve acceleration and top speed running mechanics,"  Chauncy said.

His efforts were all part of the Pro Day/Combine Training program. The program's goal is to mentally and physically prepare graduating collegiate athletes for their school’s Pro Day and, eventually, the NFL.

"Because of this program, my skills and confidence have improved," Chauncy said.

Carolina Football Club player, Carter, and his mother, Ling, have a deep appreciation for the work and collaboration within the Sports Medicine Institute and the Return to Play Program.

Carter, now 16, has been playing soccer since he was five. He started working with the sports performance team through a partnership with his soccer club. In late 2018, Carter was going for a ball, went down on the grass and heard a pop. After a visit to the Sports Medicine Institute, he soon learned he tore his ACL and meniscus and would need surgery.

The road to recovery started a short two days after surgery with Spartanburg Regional’s Sports Medicine physical therapists and continued for seven months. As physical therapy ended, Carter transitioned into the Return to Play program to bridge physical therapy with getting back on the field. Carter worked closely with the sports performance team to get back to 100 percent.

Carter and his family appreciated the collaboration between all members of the recovery team.

"It was reassuring to know all members of the team were working under the same umbrella and collaborating on his recovery. The outcome was amazing. He is doing great now and back to playing soccer," Ling said.